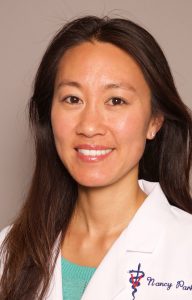 Dr. Nancy Park-Dorner was raised in the suburbs of New York City. She went to Cornell University and obtained her B.S. in Biology. She didn’t stray far when she continued on to the University of Pennsylvania’s School of Veterinary Medicine where she obtained her Veterinariae Medicinae Doctoris (VMD) degree. To get a taste of what life was like on the opposite coast, she interned in general veterinary medicine at VCA West Los Angeles for a year. She then pursued a veterinary ophthalmology internship the following year at Eye Care for Animals’ various locations in Culver City, Tustin and Las Vegas – allowing her West Coast explorations to continue.

Convinced that veterinary ophthalmology was her long-term career path, she obtained and completed a residency at the Chicagoland Eye Care for Animals Program. By the time her residency was completed, the call for the West Coast was strong. She packed up her life and moved back to Los Angeles to continue her career as a board-certified veterinary ophthalmologist. During her residency, Dr. Nancy Park-Dorner had adopted a six-year-old Red Doberman, whom she named “Red”. This special boy, aside from being an amazing gentle giant, had been born blind. He had later been diagnosed with prostate cancer at eight years old. She relocated to Southern California to enjoy an excellent quality of life and wanted that for Red as well.

Because prostate cancer is a very malignant and difficult cancer to treat, Red was given a 6 to 12-month prognosis. To help maintain his great quality of life, she continued to give the recommended conventional or ‘Western’ treatments, but decided to branch out and begin studying Eastern Veterinary Medicine. She attended the Chi Institute of Traditional Chinese Veterinary Medicine where she learned how to integrate food therapy, herbal therapies and supplements and acupuncture into Red’s every day routine.

Although a firm believer and established practitioner of Western Veterinary medicine, Dr. Nancy Park-Dorner believes that the combination of Western medication and Eastern therapies and treatments, allowed Red to live comfortably for 3 more years. Red’s life serves as a testament to the benefits of complementary Eastern medicine in conjunction with conventional Western medicine when it is indicated and appropriate.